Melody is the most tangible element of music, the most easily recognized and remembered. Think of the “Ode to Joy” from Beethoven’s Symphony no. 9, the Beatles’s “Yesterday” Franz Gruber’s “Silent Night,” “The Waltz of the Flowers” from Tchaikovsky’s Nutcracker Suite. We cherish these tunes and so many others; they are among the most precious moments in the art of music.

The Contour of Melody

Basically, melody is a line of notes with a contour. It may rise or fall; it may remain on a level; it may be rounded or jagged; it may have a wide or narrow range. Each of these patterns contributes to musical meaning and expression. As the gestures of a dancer or actor convey a mood on the stage, or as the path of an artist’s pencil gradually builds a meaningful image, so does a line of notes build a melodic shape. When a melodic line rises steadily, it can suggest increasing energy or tension; when it drops steadily, it can suggest relaxation or a sense of settling. A melody that is more or less level, or has a narrow range of pitch, may suggest steadiness and evenness.

Abrupt rise or fall — particularly between high and low pitches — indicates bold, vigorous, or perhaps strenuous movement, especially if the pace is quick. When the melodic notes are next to each other in pitch, the melodic movement is described as conjunct. When gaps in pitch occur between successive notes, the melodic movement is described as disjunct. Ex. 1 illustrates conjunct and disjunct lines. Note how the changes in direction, the rise and fall, tend to compensate for each other. Such motion contributes to the sense of balance in the melody, in addition to its primary role in creating the melodic contour.

As a melody continues, it may arrive at an apex. This is a moment of high expressive intensity. In the beautifully lyric song by the Beatles, “Yesterday,” the melody rises to an expressive apex on the words “all my troubles seemed so far away.” The composer can shape an entire composition to rise to a grand melodic apex that gives a large-scale contour to the form of the piece. Wagner does so in his Prelude to Tristan and Isolde, and Bach does so in the second fugue of The Well-Tempered Clavier, Book I, in C Minor. Beethoven’s Fifth Symphony shows how a melody can build to an expressive climax through a series of constantly higher apices. Ex. 2.

Melodic contour joins with rhythmic patterns to create melodic figures or motives. For example, the most famous melodic motive in music, the opening of Beethoven’s Fifth Symphony, has a rhythmic pattern of three short notes and one long note, and a melodic contour that drops downward by a short leap (Ex. 3):

Formation of a motive. Beethoven: Symphony no. 5, second movement.

Like gestures of one’s hand, head, or body, a melodic motive can be very short yet convey a world of meaning. Whatever connotations this musical gesture may have carried for Beethoven himself, for us it has come to symbolize fate and, in the mid-twentieth century, victory in World War II. Given its bold, arresting motion, no one can question its aptness for these associations.

Melodic motives are the most easily recognized elements of musical form. Once you hear a motive, you can recognize it again later in the piece, and this helps you keep your bearings. A composer may repeat a motive exactly or vary it in many ways while retaining its similarity to what was heard before. He can introduce contrast among motives for the sake of variety or to create a kind of melodic tug-of-war that can intensify the ongoing action. Ex. 4 is concerned with repetition and variation: Beethoven states the four-note “fate” motive, repeats it at lower pitch, then restates it eleven times in varied forms to build steadily upward to a point of climax. He uses the one figure exclusively here to spearhead the direction of the larger melodic line. 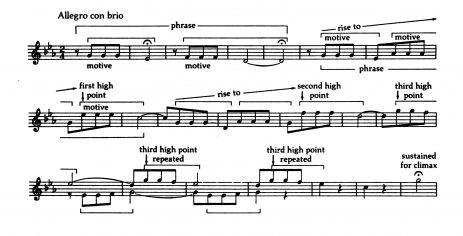 Repetition and variation of motives. Beethoven: Symphony no. 5, first movement.

Mozart sets up a contrast between the motives in the next Ex. 5. The whole orchestra begins with a flourish of three bold strokes; this is followed immediately by a reply which offers, in contrast, the merest fragment of a soft lyric melody. By going back and forth between “vigorous” and “singing” twice, Mozart sets in motion a rush of powerful musical action that pulls to a halt only fifteen measures later. Contrast here is a springboard for an exciting flight.

Allegro vivace bold flourish lyric contrast As you listen for melodic motives in any piece, note the number and variety of motives the composer uses. For example, to infuse the first movement of his Symphony no. 3 with its richness of content and breadth of form, Beethoven uses many different motives, which often stand in bold contrast to each other. In other works the composer may deal with just a few motives, constantly putting them into different situations and relationships. This was Bach’s intention in the first movement of his Brandenburg Concerto no. 2. Both Beethoven and Bach give sharp profile to their motives in these works. In Gregorian chant, the melody flows along smoothly and conjunctly without strong rhythmic imprint; we hear a stream of melodic action rather than separate motives. In each of these examples, the idea of expression that rules the entire piece is epitomized by its melodic motives. Beethoven’s music is charged with tremendous tension and conflict; Bach’s has a playful vigor; chant has a floating, remote quality.

The motive does not represent a fully developed musical idea, yet its very brevity, coupled with its distinct manner, enables it to play a powerful role in carrying forward musical movement. Each time you encounter a new motive or hear a familiar motive reappear, you sense that the music has gained fresh melodic momentum. The important melodic materials of larger works, called subjects or themes, are made up of groups of motives. They represent topics for discourse throughout the piece, much as a speaker would give the subject of discussion at the beginning of a speech or debate and then refer to it throughout the presentation. Such themes are very tuneful and we enjoy them when they appear and reappear in their respective pieces. But their most important value to the music is the way they fit into the larger design of the work, both expressively and formally. Much music of the twentieth century absorbs melody into other processes — tone color, rhythm, harmony — so that we do not hear a continuous line of melodic action; rather, melody plays a role somewhat subordinate to those other processes, as in sections of Stravinsky’s Le Sucre du Printemps.

The simplest thing a composer can do with a tune is to repeat it. Popular and folk songs repeat one melody for all stanzas of a text. Folk dances also repeat tunes in this manner. Schubert, in his short but brilliant song “Ungeduld” (“Impatience”), uses one melody for all six stanzas. Each time, the tune rises to an impassioned climax to reiterate the urgent message of impatience.

The most common and useful way to treat melody in large-scale composition is to recall the theme, literally or varied. This is a principle in the form called rondo, where the opening theme, the refrain, returns after some intervening action like the chorus of a song. A rondo refrain has to be striking so that the listener can recognize it easily when it reappears. Mozart closes many of his piano concertos with rondo finales.

Recall can serve much the same purpose in music that rhyme serves in poetry — to match the sounds at the ends of a pair of lines while changing the meaning. We can call this procedure musical rhyme. Composers throughout the eighteenth and nineteenth centuries used it in large-scale works to create an overall melodic unity. For example, in his Sonata in F Major, Mozart closes an important musical segment about a third of the way through the first movement with the passage quoted in Ex. 6a; he then rhymes this passage at a different level of pitch to close the movement (Ex. 6b).

Even if you do not read music, you can tell that the shapes are literally transposed. Such musical rhymes give you a clear sense of the unity of the piece. When music is linked to drama or poetry, melodic figures and themes can be used as musical “calling cards.” Richard Wagner carries this process to its ultimate point, tagging persons, ideas, and situations with characteristic motives called “leitmotifs,” by which you could recognize them. He makes striking use of this process in Tristan and Isolde to give two different nuances to the same basic idea. The tension and yearning that pervade the work are epitomized by the upward leap of the opening motive (Ex. 7). At the end of the opera Wagner recalls that motive, thereby creating a huge arch of meaning across four hours of music and drama. He makes, however, a subtle but all-important change. Whereas the opening figure seems to trail off, the closing figure, continues on for two additional notes, C# and D#, to give the line a strong and sustained effect of arrival.

If you have ever played an instrument or sung, you have probably felt the urge to embellish a given tune with a few touches of your own. Jazz, blues, and rock performers do that constantly. But it is not a new phenomenon. The tendency of performers to embellish melodies has been a powerful force in the evolution of musical styles throughout history. More formally, composers also embellish melodies, as part of the process of variation. The composer selects a melody, then writes a series of short pieces based on the shape of the melody, with various local changes to give each piece its own mood. The result is called a set of variations. Mozart uses the technique in his Sonata in A Major, Ex. 8a. In the first variation he decorates the melody with a whole cluster of piquant short notes (Ex. 8b), thus changing the quality of movement.

Beginning of Prelude to Tristan and Isolde.

Theme and variation. Mozart: Sonata in A Major, first movement. a)

Theme and variation. Mozart: Sonata in A Major, first movement. b)

Melody can retain its identity while undergoing remarkable changes. One process of this sort is called development. The composer may change the melody’s character, break it up into fragments to form new configurations, shift its range, vary its tone color. These are all techniques of development. Another and more spectacular way a composer may alter a melody is to transform it. If a melodic motive is clearly recognizable, the composer can set it in different expressive stances, different motions, different “costumes” without sacrificing its identity. Ex. 9 shows how Liszt transformed themes in his great Sonata in B Minor. He makes each transformation a new scene in a tableau of provocative poses, the musical counterpart of a Romantic melodrama. To make certain that his hearer will recognize his themes despite their transformations, Liszt gives each theme a striking profile. Theme 1 moves steadily downward by step; theme II has an angular contour; theme III has a group of repeated notes caught up short by a twist at the end.

Meredith Willson provides another example of thematic transformation in his Broadway musical The Music Man. He uses the same basic tune for the framework of the sweetly sentimental waltz in triple time, “Good Night,” and for the quick march in duple time, “Seventy-Six Trombones.”

In this article we have looked at melody in many contexts — as motive, as tune, as theme, in development, in transformation, in embellishment and variation. For most of the music with which we are familiar, melody is the star actor taking center stage. But as the following articles show, harmony shapes and directs the scene, rhythm propels it, and texture gives it color.