Harmony is concerned with effects that are produced when two or more notes are sounded together. It also deals with the ways in which such effects can be used to promote musical movement and arrival.

In previous articles we explored harmonic sound as color. Here we look at how harmony works in the movement-arrival cycle.

Sounds that are harmonically stable convey an impression of firmness, solidity, and restfulness. They serve as points of harmonic arrival. Sounds that are harmonically unstable convey an impression of imbalance and restlessness. They urge the music forward. Between the extremes of total stability and utter instability there are gradations, some of which are illustrated in Ex. 1. Generally speaking, stable combinations are described as consonant while unstable combinations are dissonant. 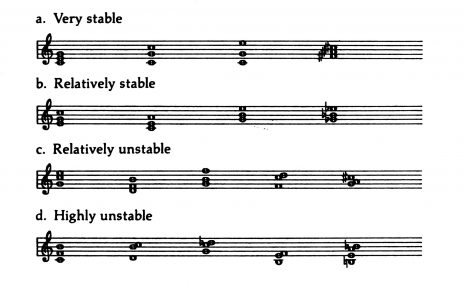 Traditional Western harmony has established certain conventional progressions from unstable intervals to stable ones (any combination of two notes is called a harmonic interval). In Ex. 2, we hear the first interval as unstable, demanding some kind of resolution. The most satisfying resolution of that tension is to proceed to the second interval, which is stable. As such, it counteracts the edginess of the first interval with a mellow, sweet effect.

Virtually every piece of music written from the eighteenth century to the beginning of the twentieth century uses this kind of harmonic progression extensively. A chain of such progressions can support the harmonic action of an entire piece. Ex. 3 shows a chain of these progressions in a simple context.

This is the harmonic language with which concertgoers are most familiar. It is the language upon which both the simplest popular songs and the most profound symphonies draw. Schubert’s well-known song, “Der Lindenbaum” (“The Linden Tree,” Ex. 4) illustrates this meshing of processes. The points of stability are marked with down arrows, instability with up arrows; the cycles themselves with brackets. Notice Schubert’s graceful wavelike melody that eventually rises to an expressive climax. He balances the sections both by making them the same length and by repeating melodic material. Notice also how slowly he changes between stable and unstable harmonies.

When notes are sounded together, whether simultaneously or in succession, there seems to be a tendency for one note to assert itself in our hearing more strongly than others and thereby establish itself as a point of reference. You can illustrate this simply by humming a familiar song such as “My Old Kentucky Home” or “America.” Stop humming just before the last note. The song is halted short of its goal. No matter what you do rhythmically or melodically, the sense of arrival necessary to round off the piece is missing unless you hum that last note. The last note (or tone) is a point of reference for the whole piece: it has established itself as a “tonal center.” The Schubert song clearly centers on the note E. We hear it as a point of arrival in the melody in measures 6, 10, and 16. E is the tonal center for the piece, so we say that the piece is “in the key of E.”

In traditional harmony, a key is a group of notes arranged around a central note, making use of progressions from instability to stability in order to direct the harmony toward that central note. Ex. 3 constantly hovers around the note C, touching it again and again to create an absolutely clear and firm effect of C as the point of harmonic reference, the “tonic.”

Harmonic relationships are not the only way to establish a tonal center. A note begins to impress itself upon our attention also when it appears frequently and prominently in a passage. Medieval music and non-Western music locate their tonal centers this way, as in Ex. 5a. To show the subtle yet all-important difference between prominence and the interplay of stable and unstable sounds, a somewhat similar melody is given in Ex. 5b. This second melody uses the notes bracketed to create an instability-stability effect that ties a knot around the note C, securing its identity as the tonal center.

Definition of tonal center, a) By prominence, b) By interval relationship.

Examples 5a and 5b each use much the same set of notes, but they define their respective keys in quite different ways. Notice the expressive effects these two methods project. Example 5a seems to float with a somewhat questioning effect while Example 5b asserts itself strongly. If we take all the notes used in Example 5b and line them upward by steps, starting with the tonal center, C, we have the familiar major scale (do-re-mi-fa-so-la-ti-do), illustrated in Example 6a. It also shows the size of the steps from one note to the next in the major scale. Example 6b shows the steps in the minor scale. The most important difference between the major scale and the minor scale is the third note. The third note in the minor scale is lower by one half step than the third note in the major scale. This lowered third imparts to the minor key its dark, somewhat pathetic effect.

Major and minor keys can set each other off very effectively. Beethoven took advantage of this contrast at the beginning of the fourth movement, the finale, of his Symphony no. 5. Toward the end of the third movement, the music is in a minor key, dark and brooding; then it builds quickly to burst into a massive, brilliant major sound to begin the finale. The minor key provides dramatic staging for the entry of the major. 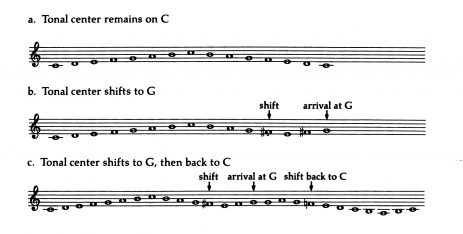 In the Christmas carol “Adeste Fideles” (“O Come All Ye Faithful”), the music arrives at a new tonal center on “Come ye, o come ye to Bethlehem.” It returns to the original tonal center, the home key, at the refrain “O come, let us adore him” and remains there for the rest of the song.

Eighteenth- and most nineteenth-century composers accepted as a basic requirement the idea that a movement should begin and end in the same key. Modulation is a technique they used to meet this basic requirement. Modulation raises a question by moving away from the home key. This question is answered by a compensating return to the home key. Meanwhile, the composer has created a bolder harmonic profile. In Example 7a above, the harmonic contour is flat, since the harmony remains in the home key, C:

In Example 7c the harmonic path has a marked profile due to the modulation to G:

Modulation can involve a subtle shift of key, such as from C to its companion, G. It can also create a bold, colorful effect when the keys seem to lie musically “far apart.” Beethoven, in the second movement of his Symphony no. 5, makes a surprising change of key after his opening songlike melody has run its course. He brings in a passage of total harmonic instability; we do not know where he is leading the music. Suddenly a brilliant melody in a new key bursts forth. Beethoven here combines all elements to create a blockbuster effect. He shifts the key color from soft and mellow to bright and dazzling, changes the motion from connected to detached, and transfers the orchestral sound from low strings to high brass. Beethoven liked this effect so much that he recalled it twice more in the course of the movement, each time setting it up with careful and deliberate shifts in harmonic color. Example 8 illustrates the first of these critical harmonic shifts.

We have explored some of the basic processes of harmony — the stability-instability connection, tonal center, modulation — using chiefly simple pairs of notes sounding together and single line examples. These draw for us the threads that bind harmonic action. But harmony usually deals with fuller sounds — chords. A chord consists of three or more notes sounded at the same time. In traditional harmony, the basic chord is called a triad, meaning a group of three. Composers have traditionally used four types of triad, which differ according to the intervals between their member notes. Example 9 illustrates these four types: major, minor, augmented, and diminished. Each kind of triad has its own characteristic sound. The major triad is bright and stable; the minor triad is rather darker, yet quite stable; the diminished triad has a tight, dissonant quality, rather edgy; and the augmented triad has a rich, sweet yet unstable effect.

The sweet sound of a song like “America the Beautiful” is based on the many major triads it uses, while the darkness of the second movement, the funeral march, of Beethoven’s Symphony no. 3 is due largely to its minor triads. Diminished triads frequently appear at points of instability in eighteenth- and nineteenth-century music. Augmented triads, with their special color, appear much less frequently; Franz Liszt had a particular liking for the augmented triad and gave it prominence at the beginning of his Faust Symphony to suggest the restless introspection of the philosopher, Faust. If we place an additional note above each of these triads at the interval of a seventh from the bottom note (for example, C-E-G-B or G-B-D-F), the chord becomes a “seventh” chord and takes on dissonance. Beethoven, showing his characteristic boldness, began his Symphony no. 1 with an arresting dissonance, a seventh chord.

Chords give body to the essential processes of harmony. They secure stability; they intensify instability; they clarify and confirm keys; they give color and force to modulation. They can accomplish these effects because, like individual notes, they have relationships among each other. To demonstrate this point, we look at how one key, C major, deploys its triads.

Each note of a key — in this case C major — has a triad built upon it. Example 10 illustrates these triads, showing the conventional designation of each triad by the Roman numeral and the name that describe its position in the scale.

Triads in a major key.

For any given key, the triads I, IV, and V (and the seventh chord on V) play the most important roles in shaping its harmonic progressions. In the song “Silent Night,” for instance, the sequence of chords is:

This progression gives a very clear impression of the major key.

In “Silent Night,” pauses in the motion were regularly spaced. Some were strongly marked, some lightly marked in their effect of punctuating the line. A progression of chords leading immediately to a strong or light pause is called a cadence. Example 11 shows how different kinds of cadence in a passage in C major work within the key to indicate and confirm it.

This article has described the traditional Western system of harmony, which was in force for at least three centuries. Although many twentieth-century composers have gone beyond the traditional system to explore tonal relationships that had not previously been usable, their early training in the standard harmonic language gave them a firm footing that served them well in their explorations. Moreover, a great deal of the musical talent of our age is involved with popular, theatrical, and broadcast music, all of which relies heavily upon the cadences and keys of the traditional harmonic system.