A Work of Art Exists on Two Levels. On the one hand it embodies a deeply felt experience, a moment of rapturous awareness projected by a creative temperament. On the other, it embodies a way of shaping sensuous material — sounds, colors, blocks of marble, words — into artistic forms, according to techniques and procedures that derive from the nature of that material. In other words, a work of art possesses an expressive content and a formal content.

Form and content are indivisible parts of the whole. They can no more be separated than can body and mind. However, the emphasis may rest upon the one or the other. We call that attitude classical which seeks above all to safeguard the purity of form. We call that attitude romantic which concerns itself primarily with the expression of emotion.

The classicist exalts the values of order, lucidity, restraint. He seeks purity of style and harmonious proportion, striving to bring to perfection what already exists rather than to originate new forms. Achieving a certain measure of detachment from the art work, he expresses himself through symbols that have a universal validity. The romanticist, on the other hand, exalts the unique character of his personal reactions and strives always for the most direct expression of his emotions. He rebels against tradition, valuing passionate utterance above perfection of form. He sees the strangeness and wonder of life. His is an art of infinite yearning, rich in mood and atmosphere, picturesque detail, and striking color. Music for him is an enchantment of the senses, an outpouring of the heart.

Classic and romantic correspond to two fundamental impulses in man’s nature: classicism to his love of traditional standards, his desire that emotion be purged and controlled within a form, romanticism to his longing for the unattainable, his need for ecstasy and intoxication. Both impulses have asserted themselves throughout the history of art. There have been times, however, when one markedly predominated over the other. One such era was the nineteenth century, which has come to be called the age of romanticism.

The French Revolution signalized the birth of a new society which glorified the individual as never before. Freedom was its watchword: freedom of religion, freedom of enterprise, political and personal freedom. On the artistic front this need for untrammeled individualism took shape in the romantic movement. The romantic spirit pervaded the arts of poetry and painting, as is amply attested by the works of Keats and Shelley, Delacroix, Turner and their contemporaries. But it was in music that romanticism found its ideal expression: music, the art of elusive meanings and indefinable moods.

The nineteenth-century climate was hospitable to the belief that the prime function of music is to express emotion. The short lyric forms — art song and piano piece — came to the fore, incarnating all the youthful exuberance of the romantic movement. Schubert, Schumann, and Mendelssohn, Chopin, Liszt, and Brahms carried this appealing genre to its finest flower, finding the romantic song and piano piece ideal for subjective lyricism and intimate communication with the listener.

At the same time the nineteenth century was drawn to the spectacular and the grandiose. Having inherited the symphony from Beethoven, the romantic composers transformed it into a vehicle for purple rhetoric and dramatic gesture — two elements dear to the age of Byron and Victor Hugo. Theirs was a music of sumptuous color and shattering climaxes, rich in poetic utterance, based upon the sonorous magic of the orchestra. Berlioz, Wagner, and Liszt were the leading proponents of what they boldly called “the Music of the Future.” They perfected the genre of program music — that is to say, of music associated with specific literary or pictorial images — in which a poetic idea assumed a central position within the expressive scheme. In so doing they established music as a language of symbols, as the expression of literary-philosophical, world-encompassing ideas that must actuate all mankind. Program music was as basic to the nineteenth century as “pure” or absolute music was to the classically minded eighteenth. Why? Because to the romantic composer music was more than a manipulation of themes, harmonies, rhythms. To him, the sounds were inseparably allied with feelings about life and death, love and longing, God, nature, man defying his fate. To return to the terminology of the beginning of this chapter, the romantic musician valued the expressive content of music more than he did its purely formal content.

The central figure in the nineteenth-century ferment was Richard Wagner (1813-1883), whose grandiose dramas best exemplify the German penchant for attaching “deep” meanings to music. Nature and intuition are glorified in his operas, which hymn German forest and mountain, the Rhine, the ancient Teutonic myths of gods and heroes; which sing of love and passion with an abandon never before achieved; and in which, in The King of the Nibelung, the proceedings on stage are infused with all manner of political, moral and philosophical symbols. Wagner expressed the typically romantic desire for a “union of the arts.” If music, poetry, and painting could produce such moving effects separately, how much greater would be their impact if they were combined. He was persuaded that only in his theater would all the arts find their mutual fulfillment: music, poetry, and drama, dance, painting (scenery), and sculpture (the plastic movements and poses of the actors). Through his use of Leitfmotive or “leading motives” — compact themes which symbolize characters, emotions, ideas, and even objects in his dramas — he brought to its farthermost limits the romantic attempt to make music conjure up specific images and feelings. Wagner’s harmonic procedures, we shall see, had decisive importance for those who came after him. Tristan and Isolde heralds the impending crises in romanticism, in harmonic language, and in the whole system of assumptions on which western music was based.

A classicist strain n romanticism was exemplified in the early part of the century by Mendelssohn, in the latter part by Brahms. These two composers were quite different from one another; and they differed even more from a musician like Verdi. Yet all three had in common a horror of philosophical disquisitions in music, and a desire to make their art function on a purely abstract level of expressivity. The most vociferous exponent of this classical point of view was the critic Eduard Hanslick (1825-1904). He is remembered today chiefly as the prototype of Beckmesser, Wagner’s savage caricature of a hidebound pedant in Die Meistersinger. Actually, Hanslick was an able thinker who disliked Wagner’s ideas rather than his music. He was irreconcilably opposed to the extra-musical trend of the “Music of the Future.” And he enthusiastically supported the attempts of his friend Brahms to lead music back to the purity of the absolute forms — to the symphony and sonata which the nineteenth century had inherited from the eighteenth.

The conflict between classical form and romantic content was thus basic to the romantic era. As the century wore on, the schism between these two esthetic attitudes widened steadily, irreparably.

The End of an Epoch

Increasing reliance upon extra-musical elements — literary, pictorial, emotional — could not but weaken the sense of form and order in music. In the second half of the nineteenth century, structural values gave way in ever greater degree to autobiography, sensual intoxication, and “nature” pictures. Unbridled emotionalism came to be characteristic of a style that made more and more use of gargantuan orchestral forces and over-expanded forms. Harmony and orchestration were vastly developed at the expense of rhythm and structure. This emphasis upon emotion and self-expression ended in an exacerbated individualism. Traits appeared that invariably attend the twilight of a style: a tendency toward bombast and verbosity; a fondness for the theatrical and the grandiose; a sonorous apparatus and a wealth of effect in no way commensurate with the idea content. The irrepressible vitality that had carried music through the nineteenth century was depleted. It became apparent that the romantic impulse had exhausted itself. 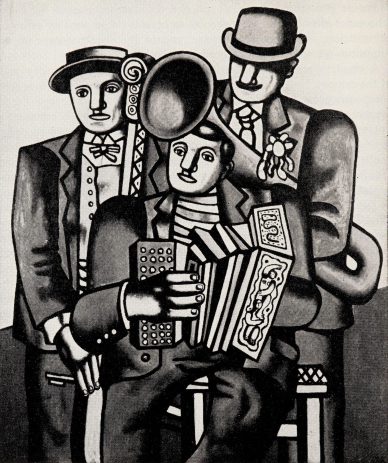 One of the first tasks of the New Music, consequently, was to shake off the burden of a tradition that was no longer fruitful. The twentieth century had to assert its independence much as an adolescent has to I rebel against his parents. The revolt was twofold. Composers not only had to free themselves from the domination of their immediate predecessors, they also had to fight the romanticism within themselves. The modern movement in art took shape as a violent reaction against everything that the nineteenth century had stood for. “_The pull-away from romanticism_” was the crucial issue throughout the first part of our century.

Out of this need came an irresistible swing toward a new classicism, a powerful trend which was nothing less than a revolution in style and taste.