We now shift our focus. In other articles, our responses as listeners were the center of attention. We explored ways in which effects of sound, movement, and arrival touch our musical sensibilities, how they stir our feelings. Now we enter the composer’s workshop to get a look at some of the musical processes by which composers create these effects. They include the basic elements and processes of music — rhythm, melody, harmony, and texture.

Rhythm measures and manages musical time. It measures time by note values and by meter. It manages time by arranging various patterns of note values in order to give character to a passage. Ex. 1 demonstrates the difference between simple measurement and expressive management of musical time. To get a feel for the difference, tap out the series of equal taps in 1.a. at a rate of one per second. It becomes monotonous and meaningless very quickly. Now, divide each alternate tap into two shorter ones, as in 1.b. You immediately set up a character, an attitude; as you continue, this pattern tends to assert itself and convey a simple and well-defined message, a sort of musical Morse code.

Measurement and Management of Rhythm.

Here we deal with rhythm as a process, focusing on the way it imparts character and expression to musical sounds.

The very heart of the rhythmic process lies in the distinction between duple time (1-2, 1-2, 1-2) and triple time (1-2-3, 1-2-3, 1-2-3). When a composer decides to use either duple or triple time he commits himself to one basic kind of motion. For example, Johann Strauss Jr. used the swinging triple meter of a waltz rhythm to give his Blue Danube Waltz its unique lilt; John Philip Sousa took a rapid duple beat to give his “Stars and Stripes Forever” march its crisp, authoritative air.

Suppose we take a series of seven beats and organize them, first in duple meter, then in triple meter:

In each of these series, the beats marked 1 represent departure and arrival, while the others represent movement. Duple meter hits the ground more often than triple meter. Conversely, triple meter moves along further in each of its units, and has fewer points of arrival. The underlined notes are accented; they receive stress and are called downbeats. The notes between those underlined are unaccented; they lack stress and are called upbeats. The alternation of accented and unaccented notes is an essential feature of musical rhythm.

When you feel that the mood of a piece is “jazzy,” “stately,” “like a march,” “waltz-like,” or reminiscent of some other kind of dance, you are responding to something very basic in the form and content of the piece. You are responding to rhythmic patterns that have a distinct personality.

When you tapped out the long and short notes of Ex 1.b. you were creating rhythmic patterns — short, coherent groupings of notes of different lengths. In compositions, such patterns are signals; they suggest expressive qualities that you respond to. Rhythmic patterns are countless. They range from the simplest two-note groups, as in the first strain of The Blue Danube Waltz, to highly complex combinations, as in the introduction and opening strain of “The Stars and Stripes Forever.” For most listeners, the most familiar rhythmic patterns are those heard in traditional and popular dances. Each dance has its own pattern, by which we recognize the dance and respond to its expressive message. Ex. 3 illustrates rhythmic patterns typical of marches (duple time) and minuets (triple time).

Other dances in duple time (most of them originating in folklore) include the gavotte, bourree, habanera, polka, schottische, reel, czardas, galop, contredanse, fox trot, tango, and ragtime. Other dances in triple time include the sarabande, polonaise, gigue, mazurka, furiant, courante, hornpipe, passepied, and Swabian allemande.

The contribution of dance to music goes far beyond the obvious and recognizable appearance of a particular dance rhythm in a piece. Composers in all genres — concert, theater, and church music — have drawn from the dance. Much of their early training as well as their mature professional work includes dance composition. They have taken the rhythmic patterns, absorbed the qualities of movement that characterize various dances, and trimmed musical action to the balances and symmetries of dance. Beethoven began the principal theme of the first movement of his Symphony no. 3 with a waltz tune. Mozart opened his Jupiter Symphony in the mood of a grand march, later to touch upon gavotte and sarabande rhythms. Bach chose a polonaise rhythm to spark the mood of exultation in the “Et Resurrexit” of his Mass in B Minor. Mendelssohn used both tarantella and saltarello patterns for local color in his Italian Symphony.Richard Strauss used an eccentric gigue in Till Eulenspiegel as a musical signal of mischief for the comic hero who plays tricks on everyone. 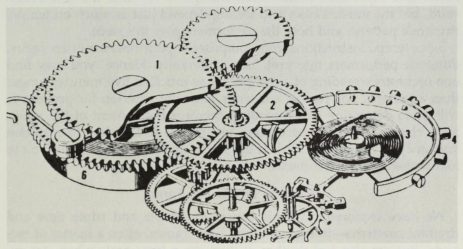 The gears of a modern watch.

Even though note values are established by a mechanical method of division and multiplication, they have an important effect on musical expression.

It may be difficult, even impossible, for a listener to detect a difference in movement between 3⁄4 and 3⁄8 time, but for composers and performers, dealing with eighth notes will tend to produce a somewhat lighter, more buoyant effect than if the same music were written in quarter notes. Actually, in the eighteenth century many musicians felt that certain meters were suited for certain kinds of expression. Indeed, the meters and expressive qualities of some compositions do match:

Meter and expression match often enough to consider the connection valid, but the music’s color and feeling depend just as much on tempo, rhythmic pattern, and how the performers play the piece.

Since tempo instructions from composer to performer are often vague, different performers interpret them differently. Hence, you may find one orchestra’s reading of a symphony as much as five minutes longer than another’s. For you as a listener, the only criterion for preference will be to determine which reading presents the content of the music most clearly. Does the pace seem to drag? Is it too slow to maintain buoyancy in the action? Or is it too hasty, making it difficult for you to follow the sense of the music?

We have explored rhythmic processes — duple and triple time and rhythmic patterns — in terms of brief time frames, often a matter of seconds. But we also feel rhythm at work on a large scale when, for example, the music changes manner from one section to another, or when it rises to a peak, or when it reaches an emphatic point of arrival. This kind of rhythm is analogous to the grand rhythms in our lives — waking/sleeping, day/night, working/resting, even the tide of the seasons. For example, we can grasp a rhythm in the very clear shifts in attitude through the various strains of “The Stars and Stripes Forever.” Sousa first catches our attention with a rousing, brief introduction. Next he gives us a light, catchy first strain and a bold, much heavier second strain. He then introduces the singing tune we all associate with this march. An agitated interlude then prepares us for a second hearing of the tune. The grand rhythm of this piece thus plays strains of relatively equal length against each other in a contrast of heavy and light action.