The full sound of a composition, as you hear it, is built from individual lines. We designate these lines as voices or parts regardless whether they are played by instruments or sung. Each voice or part is assigned its particular kind of action, as though it were one dancer or actor among an ensemble. Their composite action, the total effect of their sound and motion, constitutes musical texture.

For example, a string quartet produces one texture when each instrument is busy spinning out its own flurry of short notes, and produces a different texture when three instruments play long notes together to accompany a soloist. You would hear yet another texture if exactly the same music were played by a brass quartet. The principal textural roles a voice might be assigned are:

The textures created by these roles are of two general types: (1) homophonic, in which a single principal melodic idea is presented, and (2) polyphonic, or contrapuntal, in which two or more important melodic lines are heard at the same time.

Simple melody and accompaniment, such as singing to plucked guitar sounds, represents the most familiar and accessible kind of texture. From the earliest moments of our musical history to the present day, this kind of melody-accompaniment texture has been front and center in music-making. Accompaniments use various patterns — struck chords, sustained tones, or a pattern of light, quickly moving notes as in Example 1, where the simple accompaniment figure creates a light and flowing sense of movement.

The next Example (2) is also homophonic, since the heavy chords support a powerful melody in the uppermost voice. But notice that all voices are moving in the same rhythmic pattern, to reinforce the melody, rather than set it off. This kind of texture is called chordal.

The simplest kind of polyphonic texture is created by imitation. In imitation, one part begins with a melody; very shortly a second part enters with the same melody, while the first continues to spin out its line. Imitation may involve as few as two parts or as many as five or six separate parts. A familiar type of imitative polyphony is the round, such as “Row, Row, Row Your Boat.” In singing such a piece, you feel your part working against the others in a neatly fitted texture. Imitation can also be used to build a tight, continuous line of action in broadly scaled, complex pieces. Example 3 illustrates this procedure in a prelude by Bach; note the sense of drive and accumulation he builds as the voices enter successively.

Counterpoint without imitation fits two or more different melodies to each other. One of the most delightful examples of this is the final strain of Sousa’s “The Stars and Stripes Forever.” The trombones give us the wonderful tune in their full-throated middle register while the piccolos dance in the stratosphere with their sprightly jumping figures — a marvelous counterpoint of color, register, rhythm, and conjunct versus disjunct melody. In a more serious vein, the three lines at the beginning of Brahms’s Symphony no. 1 — rising, falling, and level — embody this nonimitative kind of counterpoint, called free counterpoint. 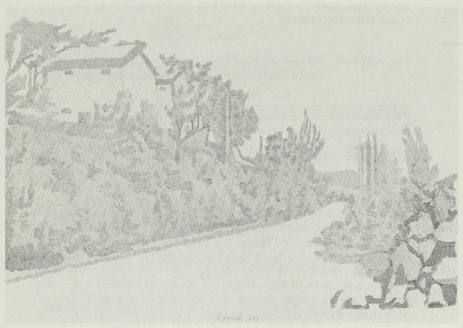 Homophonic texture lends itself to clear pauses and regular movement, governed by the leading voice. In polyphonic texture, the overlapping of voices disguises pauses and therefore promotes a continuous flow. Composers often use elements of homophonic and polyphonic texture together or side by side. For example, Brahms opens his Symphony no. 1 with two important melodic lines in the upper voices, one descending, the other rising. Underneath, the steady beat of the accompanying bass repeats the same note; it adds a firm homophonic-style support to the upper voices. Also, while there are but three important melodic lines, the entire orchestra is deployed to reinforce these lines — a procedure called doubling.

The principal melody can also be handed back and forth among performers or among various parts in a game of give-and-take. Jazz thrives on give-and-take; Dixieland could not exist without it. The exchange can be very clear, as in Dixieland, or it can be very subtle, as when an accompaniment figure takes on momentary interest; it may even suggest an imitation of the principal melody, as in Example 5.

Beethoven, throughout the first movement of his Symphony no. 3, weaves in a wide variety of textures. These reinforce the rich melodic content, the striking rhythmic play, and the bold harmonic action of this movement. Full chordal texture, simple melody-accompaniment, give-and-take, imitation, free counterpoint, unisons, melody with elaborate rhythmic accompaniment — these are some of the textures that Beethoven alternates, often rapidly, to contribute to the electrifying impact of this piece.

One important aspect of texture is the way the actual sounds of the various voices blend or contrast. For example, when a viola and cello are playing together in counterpoint, they may sound more blended than when, say, an oboe is playing a melody accompanied by a sustained trombone. Berlioz bases much of his contrapuntal writing upon this principle. Again and again in his Symphonie Fantastique he sharpens the contrapuntal effect by assigning lines to instruments of strikingly different color. The opening of the fourth movement, “The March to the Scaffold,” is a particularly bold example of contrast in instrumental tone color that sharpens the contrapuntal action.

Each conscientious performer or conductor makes a special study of the textures in a piece. He must have a clear idea of the degree of blend or separation. This is necessary so that the composer’s idea comes through dearly and undistorted. How often in a performance do we miss an important figure or voice because of a poorly projected texture — thereby losing for a time the thread of movement and the meaning of the music itself?

The two most important voices or parts in a musical texture have traditionally been the outer, that is, the lowermost and uppermost, parts. This is simply because we can hear better what goes on in these parts than we can the inner parts. Outer voices form the skeleton of most musical textures, with other voices filling in for richer sound, as Example 6 illustrates:

Texture is a telling indicator of historical styles. We can illustrate this point with two highly contrasted treatments of texture, each typical of its era: a Renaissance motet for voices and a modern work for a small group of instruments, Stravinsky’s L’Histoire du Soldat. 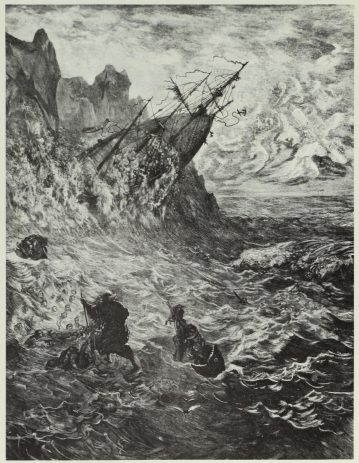 Illustration for The Wandering Jew by Gustave Dore.

The palette of textures from which composers can choose is incredibly rich. Like melody, texture takes on vitality and color through the inventiveness of the composer.