Music moves toward goals. To be intelligible, musical movement must arrive, and any action that throws musical movement into relief provides you with a sense of arrival. For example, the tone of an electric motor has a certain musical quality — a steady pitch and perhaps even a pleasant timbre. As it hums along monotonously, though, you quickly tune it out as meaningless background noise.

But suppose the hum stops for a second or two, then resumes. For that moment, your attention is fixed on the effect produced by the silence. That silence acts as a point of arrival for the moving sound of the motor. Now, suppose the motor speeds up and the pitch rises. Again, your attention is fixed, drawn to the onset of the higher pitch as a point of arrival.These two points of arrival might be illustrated graphically, as in Ex. 1.

In a composition, points of arrival form a chain that gives the piece structure. Each arrival (except, of course, the last) is also a point of departure, so the music moves forward with what might be called a pogo stick effect. How the points of arrival affect the music’s movement depends on how final, how clear, and how emphatic they are.

Composers usually give their pieces clear and decisive conclusions. Any symphony by Haydn, Mozart, or Beethoven makes its final arrival this way. But throughout a piece composers also distribute intermediate points of arrival that close off cycles of movement. Unlike final points of arrival, these leave the door open to further movement. In this sense, music closely parallels language. The varying degrees of finality in music are analogous to points of punctuation in language — commas, semicolons, periods, question marks, and exclamation points. A simple series of eight taps can illustrate the point. Since we tend to group taps by twos and fours we can assign a comma value to the fourth tap and a period value to the eighth tap.

Using the familiar terms of language, we can rate degrees of finality in musical arrival accordingly:

The various degrees of finality can be used in different ways to reinforce the expressive qualities of a piece. Mozart, in his Sonata in A Major (Ex. 3), maintains exquisite balance among all the aspects of the piece — sound, movement, and arrival — by holding them in place with evenly spaced and properly graded points of “punctuation.” Accordingly, the sonata’s theme conveys an all’s-right-with-the-world feeling. Haydn, on the other hand, packs the first few measures of his Sonata in Eb Major with challenging contradictions (Ex. 4). He reaches four successive final-sounding points of arrival at the very outset of the piece. Yet not one of these halts the movement; they simply hold it back momentarily. Then, after using a bold downward swoop to head once more toward a decisive point of arrival, Haydn throws in what we hear as a combination exclamation point and question mark! In these examples Mozart expresses an elegant serenity while Haydn is full of biting wit that parodies a stately manner. 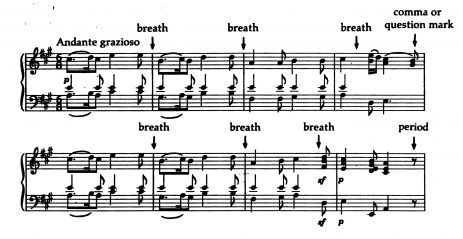 Both the Mozart and the Haydn examples come from the openings of movements, showing the effects of finality on a small scale. At the end of a long work, the composer generally escalates the effect of impending final arrival. He forges a chain of closing gestures to create an area of arrival. This is especially characteristic of nineteenth-century symphonic and operatic music. 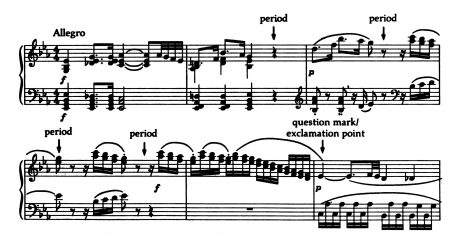 Beethoven fashions one of the most stirring windups of any major work at the very end of his Symphony no. 3. A rousing set of fanfares builds to a series of brilliant and emphatic strokes that recall the arresting start of the symphony.

Not all works end with such forceful finality. Brahms closes his Symphony no. 3 with a gradual evaporation of sound, so that even after the music has ceased, you remain in a spell of stillness. Schubert also leaves something unsettled at the end of his song “Die Stadt” (“The City”).

The eerie mood he has conjured up by the ghostly vision of a dream city is prolonged by the totally restless effect with which he ends the song. Thus, the way a composer ends a piece can crystallize the ideas he has expressed throughout the work.

Clarity and Emphasis of Arrival

Arrival is clear when we sense a well-defined pause or break in musical movement. Most familiar songs have clear points of arrival for their various phrases. “The Star-Spangled Banner” starts with two:

Full clarity of arrival, if maintained throughout a composition and regularly spaced, will tend to make the music immediately intelligible.

Songs and dances, such as Johann Strauss’s Blue Danube Waltz, observe this procedure faithfully. Music that has a speculative, searching quality, however, will often mask its intermediate points of arrival. Bach was the master of this art. In the first fugue of The Well-Tempered Clavier, Book I, Bach deploys only two points of arrival — one midway through the piece, the other at its conclusion.Actually, the opening solo melody hints at a point of arrival as it rounds off, but then Bach covers the punctuation as a second part enters before the first finishes. He reduces clarity of arrival for the cumulative effect of continued movement.

A composer may also overstate intermediate arrivals. This tends to build a drive toward a later arrival that will be unquestionably clear at its proper time. Beethoven provides a striking example of this kind of tradeoff in his Sonata in Eb Major, Ex. 5, below. He arranges three bold and very closely spaced points of arrival.

Then, just when you may expect the fourth point as a continuation of this pattern, he masks that point and moves the music powerfully forward to reach a more decisive point later. The irregular treatment of arrival, the rich, low sound, and the slow pace combine to create the air of great portent indicated by Beethoven’s tempo marking, which means “broadly, with great expression.”

Varying the emphasis of arrival can entirely change what the music expresses. If, in the finger-tapping exercise, Ex. 2, you strike the last of the eight taps much more forcefully than you do the preceding taps, you convey a sense of firm intention, perhaps even a touch of violence. If, on the contrary, you strike the final tap much more lightly — deemphasizing the effect of arrival — you convey something entirely different: questioning, surprise, even indecision. Beethoven makes a wonderful play with these effects at the beginning of his Symphony no. 7 in A Major. The stroke that opens the piece and the intermediate points of arrival formed by the three subsequent strokes are emphatic. The next point of arrival, a few seconds later, is hushed. The contrast between the two kinds of arrival highlights the mercurial changes in feeling that Beethoven expresses here. 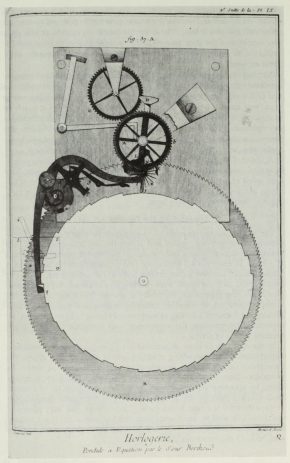 Approaching the Point of Arrival

The way music moves leads us to anticipate its points of arrival; conversely, those arrivals control and shape the musical movement. But consider your perceptions and feelings as movement approaches its point of arrival. In Ex. 3 above, the first movement of his Sonata in A Major, Mozart conveys a comfortable feeling. He delivers arrival exactly on schedule, as if the music were running by clockwork. This is a pleasant, reassuring experience, especially when the music has such elegant charm. Beethoven, on the other hand, conveys in his Sonata in Eb Major (Ex. 5 above) a feeling of suspense, of being caught up short, by repeatedly interrupting the movement with emphatic yet only intermediate points of arrival.

In the first two or three minutes of his Symphony no. 3, Beethoven demonstrates the compelling effect of arrival delayed. He drives the movement forward, using ingenious tactics to prolong the drive: he promises — then withholds — the effect of closure by sudden interruptions, by spinning out movement, by undermining effects of finality. Each decisive point of arrival along the way is at the same time a point of departure for the next broad cycle of movement. The very power of the drive followed by the hammering effect of arrival provides springboards for further action — as if arrival were inadequate, except at the end, to hold movement in check.